Childcare operators must look beyond the ‘deserts’ to pinpoint new locations

Other than during a period of national emergency, such as the recent COVID pandemic, it is unusual to see the Labor Premier of one state and Liberal Premier of another come together to make a joint announcement about shared policy objectives. Well, that’s what happened last month when the NSW Premier, Dominic Perrottet, and Victorian Premier, Daniel Andrews, issued a joint statement of intent to overhaul the early childhood education sector. The statement was in turn backed by the Commonwealth Government.

The NSW Government announced it will invest more than $5.8 billion over 10 years to introduce universal pre-kindergarten for all children. The Victorian Government announced it will invest $9 billion over 10 years to provide pre-kindergarten, deliver universal pre-prep for 4-year-olds, and establish 50 government operated childcare centres.

As part of the announcement, NSW Treasurer, Matt Kean, stated that investment in childcare is the best way to improve women’s economic opportunity, increase female workforce participation and close the gender pay gap, noting that ‘childcare costs impede the dreams of women across NSW, because many women are only able to keep about 30 cents in each dollar they earn when they return to work.’

The NSW Treasurer further noted that improving the affordability and accessibility of childcare is a once in a generation economic policy and that the initiative, alongside the Commonwealth Government’s childcare reforms, is expected to see up to 95,000 women enter the workforce. Given Australia’s current labour shortages, such an addition will clearly lead to increased productivity and improved macro-economic outcomes.

Childcare in Australia is a hot topic, for a number of very good reasons as enunciated in the NSW and Victorian governments’ joint announcement. Yet the levels of provision of childcare services as well as the daily rates charged for those services, and thus the ability for families to access childcare, vary enormously across the country.

With the first data release from the 2021 Census issued on 28 June 2022, it tells us that on Census night there were some 1.78 million children aged 0 – 5 in Australia, accounting for 7% of the national population of 25.42 million. Data compiled by GapMaps on the provision of childcare centres and LDC places within Australia shows that at present there are some 8,555 centres providing an estimated 617,486 LDC places – an average of 72 places per centre.

That in turn means that the provision of 617,486  LDC places in Australia at present is equivalent to one place for every 3.2 children of childcare age (GapMaps uses 0 – 5-year-olds, rather than the ABC’s 0 – 4-year-old measure).

GapMaps Live enables childcare providers, government authorities and anyone else invested in this critical sector of our society to dynamically monitor, at a small area level, all aspects of the sector. Local area analysis is a fundamental requirement because childcare services need to be targeted to local communities in each case.

Analysis of the availability of childcare services across local areas – as shown thematically on the Childcare supply-demand layer map (Figure 1) from GapMaps Live below for Greater Melbourne – highlights the locations of deserts and oases as well as everywhere in between. This analysis shows that less than half of Greater Melbourne has a childcare provision of at least 1 place for every 3 children aged 0 – 5 while many areas, particularly around the urban fringe, have less than half that provision, i.e. only one place for every 6-7 children of childcare age and sometimes even less. The picture is similar for Sydney (Figure 2), while the level of provision overall is somewhat higher in Brisbane (Figure 3) – though still with many local areas under-supplied, relative to the average. 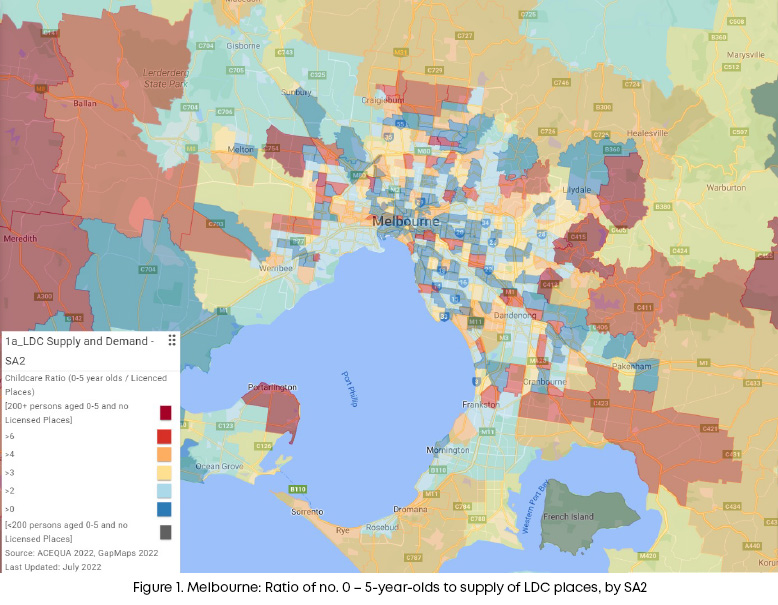 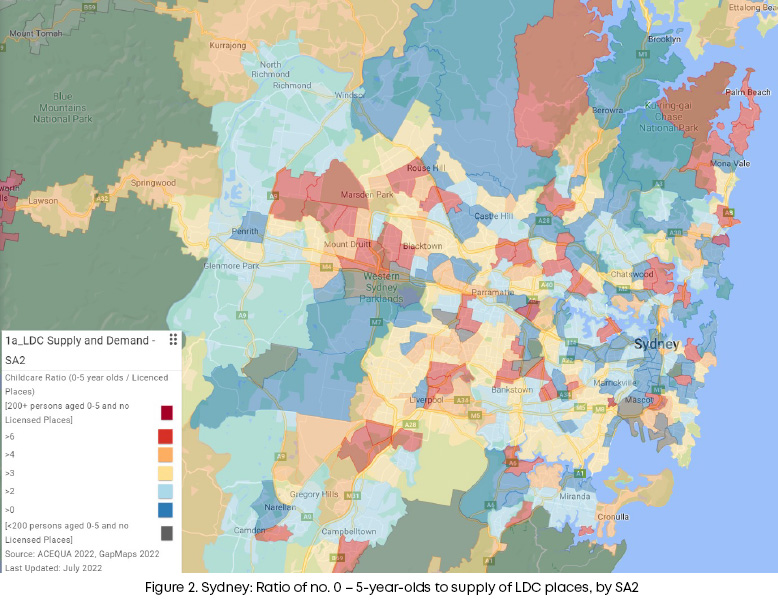 What is also readily apparent, and probably not surprising, is that levels of childcare provision are also lower across regional Australia as compared to the metropolitan areas.

The variation in the availability of childcare services is compounded by significant variation in the daily rates charged, which across Sydney, for example, can range from $180 in affluent coastal suburbs to $90 in areas such as the Blue Mountains. Interestingly, it is not necessarily the case that a high level of supply in any local area, relative to the number of children available, will translate to lower average daily cost. This is because the propensity, and financial capacity, to use childcare also varies significantly, being dependent on factors including female workforce participation rates; family income levels; ethnic background and SEIFA (Socio-Economic Indexes for Areas ) levels. In addition, spatial factors, such as the locations of schools, also help drive the decision making of childcare operators.

As the Mitchell Institute report noted, while there is some sort of relationship between supply provision and household income levels, there is a much stronger relationship between supply provision and the proportion of females in the workforce. It is difficult to say that a lack of supply is limiting females’ willingness to enter the workforce, it would be more likely that the reverse is true, and the childcare market adjusts supply to account for the local drivers of demand.

Furthermore, it is important to note that just because there is a ‘desert’ it does not necessarily mean that the surrounding centres are at capacity. Yes, there will be areas where they are, but there are plenty of locations where they are not, because prevailing average occupancy levels across the childcare sector are in the order of 70% (pre pandemic data).

These are all population attributes that are measured and with the release of the 2021 Census, a refreshed and up to date picture of the drivers of childcare demand is now available.

What the Census Data Tells Us

Some interesting data points became available upon the release of the census, highlighting that the size of the total addressable market for childcare centres has changed very little over the 5 years between 2016 and 2021. The number of 0 – 5-year-olds across Australia grew marginally, by just 0.8%, between 2016 and 2021, with the strongest growth in Victoria (2.6%), NSW (1.2%) and ACT (1.4%), this compares with total population growth of around 8.6% across Australia over this time period. Much of the growth in Australia’s population over this time came from net overseas migration (which does include some young children, but predominantly is people aged 20 – 40 years of age), and the ageing of the population (as people live longer, births outweigh deaths, leading to population growth).

In this time, the number of LDCs across Australia increased from around 6,900 in mid-2016 to 8,542 in 2022, an average growth rate of 3.6% per annum – well above the growth in the total addressable market. It seems that while slowing growth has tempered the total addressable market demand in this timeframe, and significant supply additions have been made to total stock levels, there may still be a problem with the distribution of childcare access across Australia and within particular sub-markets.

Other Factors Driving Demand to Consider

While the total addressable market has not grown much, there are many factors that drive the effective market demand for childcare. Other elements driving demand for childcare places, in addition to those listed earlier, include: government subsidies, out of pocket fees for childcare, maternity leave programs for workers, informal care capacity (i.e. near grandparents or not), the availability of childcare centres in general and the availability of places at nearby childcare centres.  Some of the above factors vary greatly by geography and demographic sub-market. For example, in ethnic communities, with a higher proportion of multi-generation households, the immediate availability of informal childcare would potentially reduce the effective demand for this cohort, relative to the Australian average.

Changes in the Size of the Addressable Market

Assessing the latest census data below the national level shows some interesting changes in the size of the addressable market for childcare by state and LGA between 2016 and 2021:

•  Victoria constituted around 79% of the net increase in the national population of 0 – 5-year-olds between 2016 and 2021, while NSW contributed 45%. WA also grew marginally, constituting 13% of total national growth – see Figure 4.

•  Wyndham and Casey LGAs, which are fast growing LGAs in outer Melbourne, saw growth of 20 – 25% in this age cohort between the two census periods. Indeed, the growth in 0 – 5-year-olds was actually more than the total Victorian growth in 0 – 5-year olds’ over this timeframe, as some LGAs went backwards. Hume and Melton LGAs were also rapidly growing areas for 0 – 5-year-olds – see Figure 5.

•  Other LGAs in the capital cities with solid growth in 0 – 5-year-olds include: Cardinia, Swan, Logan, Ipswich, Brisbane, Whittlesea, and Armadale (WA). Declining LGAs include: Brimbank (-13%) – which is a more mature residential growth area, Boroondara, Whitehorse and Darebin which all saw declines of more than 1,000 0 – 5-year-olds between 2016 to 2021.

•  Interestingly, in regional Australia many of the largest declines in the 0 – 5-year-old population were in coastal Queensland towns. Townsville , Cairns, Gladstone, Fraser Coast, Rockhampton all saw declines between 7 and 10%, while Isaac and Central Highlands declined by 15 – 20%.

•  Overall, it appears as though regional Queensland and regional WA have experienced a significant maturation of their populations, which saw their 0 – 5-year-old populations reduce significantly between 2016 and 2021, in contrast to growth in the capital cities. 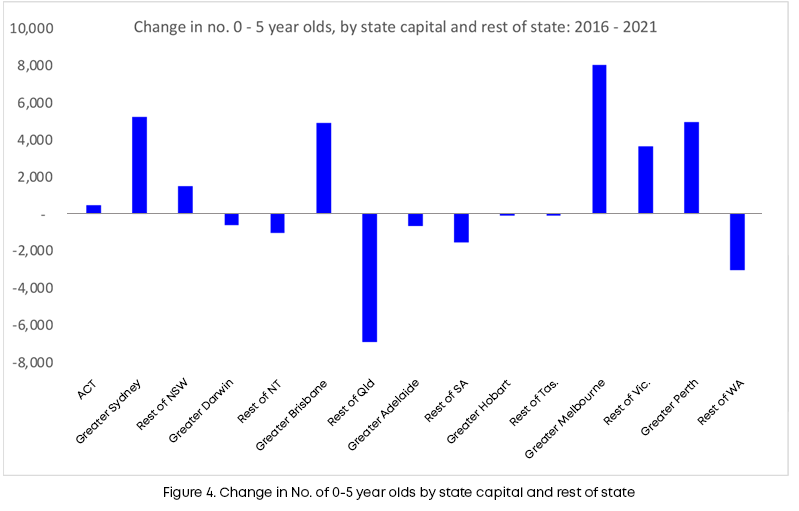 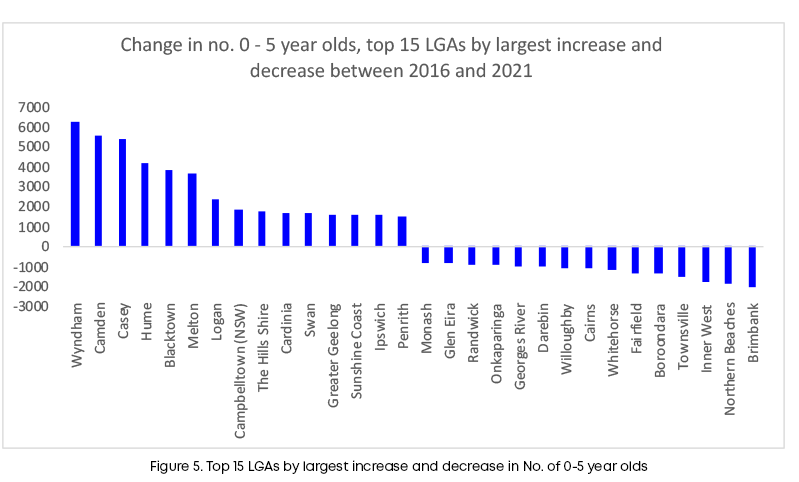 In conclusion, from our analysis of supply and demand factors using the latest census data a wealth of insights are accessible. So, it’s important operators and developers look more deeply below the ‘deserts’ identified in the Mitchell report and unpack micro-level factors for any catchment including the future growth of 0 – 5-year-olds, female workforce participation rates, family incomes, ethnicity, supply of schools and development approvals for other childcare centres – all of which are available to be interrogated in the GapMaps Live platform.

Curious to know how GapMaps Live can help you? Let’s chat. 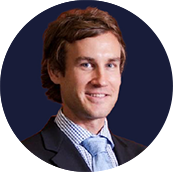